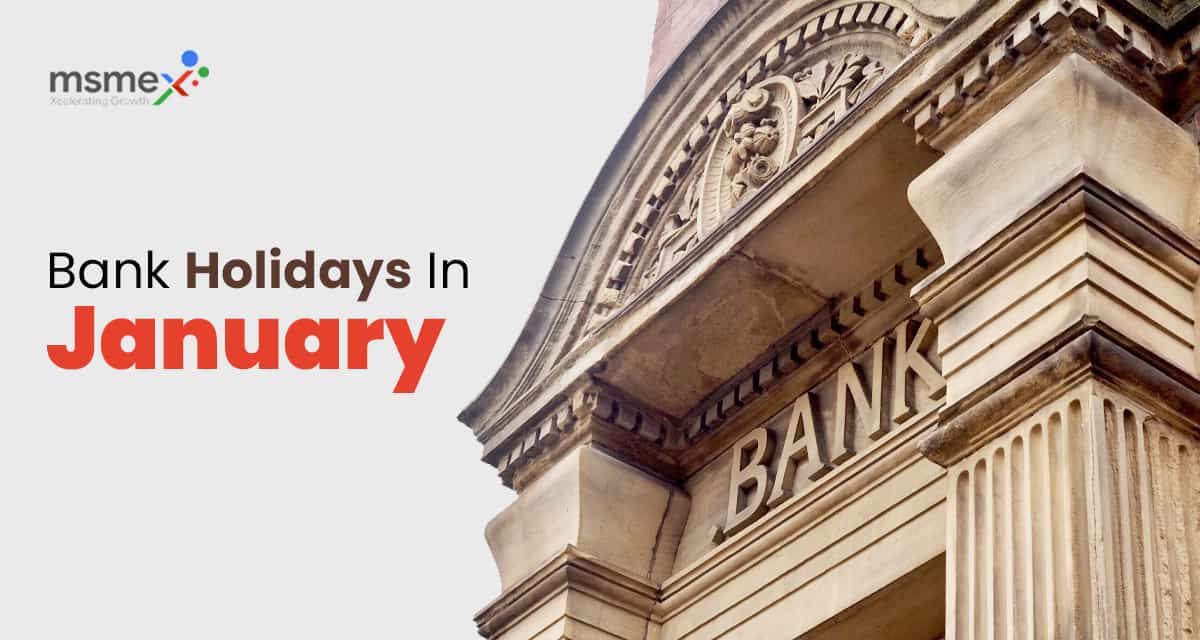 We are heading over to 2022, and yeah, here comes the holiday month. Usually, there will be numerous public and bank holidays in January. As per the holidays issued by the Reserve Bank of India, the total number of bank holidays in January is 16. This doesn’t mean all banks remain closed for these 16 days across all states. Usually, banks will be closed only in case of weekends or regional holidays. The regional holidays will depend upon the state government.

Although banks remain closed offline, the customers get 24/7 services via online banking. Of 16 bank holidays in January, seven are weekends, and nine are state-wise festival holidays. Since the banks will be closed from the first week of January, it’s advised to settle down all the banking activities before the new year. Or else, you must wait for a week to continue the banking activities. One shouldn’t miss out on this logic that the banks in a state won’t operate only in the case of regional holidays. For instance, the banks in Sikkim remain closed on January 4, 2022, due to the Loosong festival. However, the banks in other states continue to perform banking activities.

Read on to know more about the bank holidays in January 2022.

List of Bank Holidays in January 2022 – A Quick Overview

What are the Three Holiday Acts by RBI?

RBI declares holidays to banks under the below-mentioned acts. For instance, the second Saturdays, Sundays, and festival holidays fall under any of these acts and hence the Reserve Bank of India declares a holiday.

Usually, this act declares holidays to banks to resolve the user funds. These are also known as real-time gross settlements or GTGS holidays.

A Brief About Various Public Holidays in January 2022

New Year is a universal festival celebrated across the globe irrespective of religion, racism, or traditions. It’s celebrated every year on January 1. Usually, everyone wakes up till midnight and welcomes January 1 of the new year. Some people party at the club, cutting the cake, while a few celebrate at home. As soon as the clock rings at midnight, everyone cheers up and welcomes the new year with a smile.

Guru Gobind Singh Jayanti (Aka Prakash Parv of Guru Gobind Singh) is the tenth sikh guru. Usually, every year, Guru Gobind Singh Jayanti comes in either January or December. However, according to the Nanakshahi calendar, his birthday is celebrated on January 9, 2021, each year. In 2022, his birth anniversary occurred in January. He fought against injustice and dedicated his life to protecting Sikhs. Most people are involved in social activities and donate things to needy people on this day.

Mannam Jayanti is celebrated on January 2 to commemorate the social reformer Shri Mannathu Padmanabhan Pillai. He was born on January 2, 1878, in Changanacherry. He was a Gandhi follower and was involved in several social activities. He helped hundreds of families. He even founded the NSS hol(Nair Service Society) for the welfare and advancement of the Nair community in Kerala. Initially, this community had fewer members, making around 12%.

Missionary Day is observed on January 11, 2021, which is celebrated in Mizoram. On this day, people visit the local churches and offer numerous prayers. A few people dedicate that day to serving the needy people and taking their blessings. This is celebrated because the Mizoram residents found the true meaning of life on this day. Two people, namely Rev J H Lorrain and Rev F W Savidge, came to Mizoram from Assam to teach Christianity. And this day has transformed most people’s lives, and hence it’s widely celebrated in Mizoram.

Bhogi is the starting day of Makar Sankranti or Pongal. Bhogi is mostly celebrated in south India, including Andhra Pradesh, Telangana, Tamil Nadu, and Karnataka. This festival is dedicated to Lord Indra, also known as God of Rain. Since rain plays a major role in yielding, people express their gratitude towards Lord Indra through a few offerings. Usually, on this day, people replace old things with new ones, wear new clothes, and perform prayers to Lord Indra.

Pongal is extracted from the Tamil word, “To Boil.” Although both refer to the same festival, people have distinct cultures and traditions. This festival arrives in the harvesting season and is often referred to as the “Thanksgiving Festival.” During this festival, everyone shows their gratitude to Lord Indra and Lord Sun, providing enough water and sunlight for better yield. Since India is an agricultural country, Pongal is considered one of the most significant festivals. This is also known as Makar Sankranti in a few states.

Bhogali Bihu is also known as Magh Bihu. This is also quite similar to Makar Sankranti, where Assam people celebrate expressing their gratitude towards natural elements supporting the food production and helping in continuing life on Earth. Usually, at this festival, people offer prayers to Lord Sun. Moreover, women prepare delicious dishes such as Chira, Pitha, Curd, and more cuisines. At the same time, men go to fields and build small huts with leaves and bamboo.

Tusu Puja is celebrated in Assam each year on the 15th or 16th of January during Makar Sankranti. Tusu is a tribal god, and it’s the most significant festival for Assam tea tribes. Assam tribes consider Tusu as a kindness, virtues, and sacrifice goddess. Usually, on this day, tribal girls worship the goddess by preparing the idol with clay. They perform dances, wear traditional clothes, and perform various other traditions.

Thiruvalluvar is a poet and philosopher. He is often called a cultural icon in Tamil Nadu who is well known for Thirukkural(It’s a collection of ethics, love, and economy. Initially, Thiruvalluvar day is celebrated on May 17 and 18. Later it was celebrated in January each year. His couplets teach about wealth, love, and virtue. Hence he is most popular, and this day is completely dedicated to his teachings in Tamil Nadu.

Let’s Sum It Up

January has 16 bank days that include nine festival holidays and seven weekend holidays. Let’s have a quick look at the various bank holidays in January 2022.

Share
About ISO Certificate - How To Get ISO Certification In India? Its Benefits, Types, Cost & How To Check Validity? Previous post
About Private Banks, Their Functions & Difference With Public Banks Next post